Most of us were brought up and/or live in a culture that emphasizes success over failure, winner over losing. We typically present ourselves to others in the best light possible, sharing our successes rather than our failures – though there are exceptions to this generalization, of course.

In her new book, Fail, Fail Again, Fail Better: Wise Advice for Leaning into the Unknown (due out by Sounds True in September 2015), Pema Chodron discusses how to work with the feeling of failure. She names the futile strategies of repressing, blaming and creating a negative self-image, and offers a new perspective on failure. She shares that failure can be the source of growth and highlights the “rawness of vulnerability.” She writes:

“Your best qualities come out of that place because it’s unguarded and you’re not shielding yourself. Failing better means that failure becomes a rich and fertile ground instead of just another slap in the face.” (Lion’s Roar, August 26, 2015)

Psychotherapy can be a never-ending self-improvement project, in which a negative self-image may be transformed into a positive one. This kind of transformation has its place and can be helpful to a certain degree. Once established, it then needs to be maintained, while in reality all self-images constantly fluctuate between positive and negative, however subtle those fluctuations may be. Even positive self-images contain within them a sense of incompleteness. A willingness to explore and relate wisely to failures is vital to meeting life as it is – complete with its failures and its successes. Then the fluctuations of the self-image are seen and experienced within the space in which they appear, leading to greater ease and spaciousness. As Pema puts it, rather than being wiped out or pummeled by the waves of life, we can learn to swim with or ride the waves. 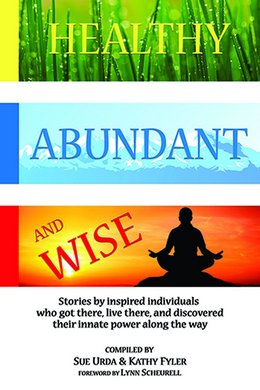 Healthy, Abundant, and Wise is a collection of stories that reflect the emotions, decision-points, and transformations familiar and personal to each of us. These stories are a gift of wisdom from the authors to you, including a story of my own, “Awakening To Love.” $10.95

Awakening To And Resting As The Love That We AreInterview for Healthy, Abundant & Wise Anthology (20 min)